New Delhi: Prime Minister Narendra Modi’s expansion of his Council of Ministers turned out to be a redrawing of his entire team, with major changes in portfolios held by senior members. This seems to be a consequence of a very thorough performance appraisal done by Mr.Modi of his Ministers over th last three months, during his monethly meetings with his entire council. 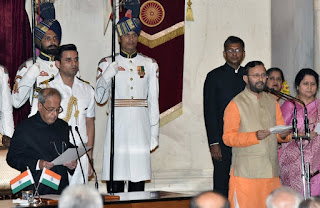 Prakash Javadekar, promoted on Tuesday morning to cabinet rank, was one of the biggest gainers in the prestigious Human Resource Development portfolio.  He replaces Smriti Irani, who has been handed the Textiles portfolio.  This brings to an end Ms. Irani’s controversyridden tenure, which saw unrest break out in campuses across the country.
By all accounts Modi’s Cabinet reshuffle is novel and major but it will not change the contours of the power balance at the top. For, he has left veterans Rajnath Singh, Sushma Swaraj and Nitin Gadkari untouched. Arun Jaitley has lost I&B but this loss isn’t big enough to dent his position vis a vis Modi given that Finance, the all-powerful Ministry, remains firmly under him. Jaitley was considered a “reluctant” I&B Minister. The ministry, vital to shaping the public image of the Modi government, will have a relatively conservative but senior M Venkaiah Naidu.

Tamta, who would turn 44 on July 16, cut his teeth in politics as a member of district panchayat in his home state Uttarakhand and rose to become its vice president.
The induction of the dalit leader from Almora comes at a time when BJP is promoting leaders of the dalit and backward communities in Uttar Pradesh and Uttarakhand where assembly polls are due early next year.

Anupriya Patel, a first time MP, is an eloquent pro-Modi voice within and outside the Lok Sabha whose OBC roots have positioned her as an important BJP ally in poll-bound Uttar Pradesh. The 35-year-old Lok Sabha member from Mirzapur in UP won on the ticket of Apna Dal, a party founded by her father and Kurmi leader Sonelal Patel which later split, with the major faction siding with her mother, who expelled her from the party.

A bureaucrat-turned-politician, Arjun Ram Meghwal, the chief whip of BJP in Lok Sabha, is known for his penchant for pedalling to Parliament.
A two-time MP, the 61-year-old was first elected to the Lok Sabha in 2009 from Bikaner constituency which was earlier represented by Bollywood star Dharmendra. Known for his active participation in Lok Sabha debates on a variety of issues, Meghwal had recently attacked the judiciary for its "extra constitutional" activism. The dalit leader had demanded that "running commentary" by judges should end.

Mandla MP Faggan Singh Kulaste, was also a junior minister in former prime minister Atal Bihari Vajpayee’s Cabinet, took oath as the Minister of State.
A BJP leader from Gujarat, Jasvantsinh Sumanbhai Bhabhor is an Adivasi MP elected from Dahod.
A Dalit, the Shahjahanpur MP Krishna Raj is among the three new faces from poll-bound Uttar Pradesh to be inducted into the ministry.
As per caste equations, Krishna Raj has been inducted in the government to target the Dalit vote bank of Bahujan Samaj Party that is in crisis these days due to the defection of two senior leader including

RK Chaudhary (Dalit) and Swami Prasad Maurya (OBC).
He is one of the BJP's Brahmin faces in Uttar Pradesh, where it is going the whole hog to win after being out of power for a decade-and-a-half.
Pandey, a first-time Lok Sabha member, is an MP from Chandauli bordering Bihar.

Pandey's induction in the Union government is being seen as an attempt to reach out to the significantly large Brahmin vote bank in the state. The Brahmins, who were traditionally Congress supporters, had been siding with BJP in the post-Mandal era.
65-year-old Akbar, who was recently elected to Rajya Sabha from Madhya Pradesh, is seen as an articulate and modern Muslim voice in BJP who can also be trusted to defend it at times on the strident Hindutva pitch with his eloquent evocation of Modi's developmental agenda.

Born in a poor farmer family, 62-year-old Chaudhary joined the RSS when he was eight years old as a 'Bal Swayamsevak' in 1961. Hailing from Bhavi in Jodhpur district of Rajasthan, Chaudhary worked hard to study law and went on to become a senior advocate of the Supreme Court.
A two-term Rajya Sabha MP, the Patel leader is a science graduate whe began his career as a school teacher in Gujarat and became principal of two schools and the chief officer of a civic body before joining politics.

His interest in politics began when he was chief officer of the Amreli civic body from November 1983 to March 1987. He quit his job in Amreli Municipality and joined BJP.
The four-time BJP MP from Assam is a known champion for the cause of small tea growers in the Northeastern state.

He belongs to the Ahom community like former CM Tarun Gogoi and his induction into the Modi Ministry could be an attempt by the BJP to penetrate into this community, traditionally known as Congress supporters. Despite Nagaon being a minority dominated constituency, Gohain was elected to the Lower House for four consecutive term.
Ramdas Athawale, known for his comic sense, is a prominent dalit leader from Maharashtra whose induction into the Modi government is part of BJP's endeavour to reach out to the politically crucial segment ahead of elections to five states including Uttar Pradesh.
Athawale, who heads the Republican Party of India (Athawale), an NDA ally, has been a trade unionist and is known more for his blunt remarks and popular laughter-evoking speeches in Parliament and outside. His induction came at a time when BJP has laid claim to the legacy of dalit icon B R Ambedkar.

Smriti Irani’s downsizing is a message that party discipline is No. 1 in the Modi regime. Irani’s name-dropping — of powerful RSS leaders and even of Modi — worked against her, said sources. In an India TV programme in May 2016, for example, in response to Congress’s Rashid Alvi, Irani said she had to live with the “poison” of being the subject of comments about her and the Prime Minister. In the Ministry, she hit headlines more because of what she said rather than any substantive decision-making. Her strident hectoring of Mayawati in Parliament and her comments on the Vemula suicide and the JNU arrests courted rather than quelled controversy. Also, a proposal from party leaders to form a consortium of all major universities to bring in research funds gathered dust.
“We don’t need a scholar in the Ministry,” said a senior leader, “but we need someone who knows how to converse with scholars.”
There is joy in the Sangh Parivar to see “pagdi wala” and “son of soil” Arjun Ram Meghwal in the Ministry of Finance. Meghwal is a former government officer from Rajasthan. A subtle message in Meghwal’s entry is that the Prime Minister and his party aren’t quite impressed with Oxbridge or East Coast in the Cabinet. Jayant Sinha’s move out of Finance was also meant to send a signal to his rebel father.

Sinha has his task cut out: to build several new airports and revive old ones. Similarly, Santosh Gangwar who has joined Jaitley’s team after losing independent charge of Textiles knows very well that under Jaitley’s leadership, the deputies are kept quite busy.
Ananth Kumar getting Parliamentary Affairs isn’t being seen as a major promotion because Modi, Shah and Jaitley are in control of legislative affairs in both Houses of Parliament.

All new 19 ministers are from North of Vindhyas except Ramesh Jigajinagi, who has been Cabinet Minister of Home in Karnataka. There are no additions from southern states of Kerala, Tamil Nadu, Telangana and Andhra Pradesh. The south is poorly represented in Modi’s Cabinet.
Domain knowledge rather than caste was the factor behind the selection of P P Chaudhary, senior Supreme Court advocate and expert on Constitutional law; C R Chaudhary who has studied rural development at University of Birmingham and staunch RSS man Anil Madhav Dave who has been active in the Narmada conservation programme.

M J Akbar’s intellectual credentials and his Muslim identity are being seen as assets in a high-profile public diplomacy role. In him, Modi sees someone who will share “Indian Islam’s unique traditions and syncretic character with the world, a leader said.
The reshuffle has also helped underline one significant change between Chief Minister Modi and Prime Minister Modi. Since the controversy of “suit boot ki sarkar,” both Modi and Shah know that an abrupt reversal of policy — even “political hypocrisy” — makes life easier in Lutyens Delhi.
Modi’s refrain now is Gaon, Garib and Kisan. In the name of social diversity, two tribal leaders, five Dalit leaders, two minority leaders and two women have been inducted in the Cabinet.
In 2014, when Modi took charge, Cabinet formation was heavily influenced by Jaitley, some RSS leaders, and Shah. Modi didn’t know many of his MPs other than their names, caste and constituencies. However, via the thorough appraisal done as part of the reshuffle process, he has a better picture of each, sources said.

So the July 5 reshuffle is one that was done solely by a Gujarati PM with the help of another Gujarati, BJP president Shah. Both left New Delhi, as per schedule, with little patience for disgruntled whispers.
While the PM left for Africa, Shah left for Ahmedabad where on July 6, he went in communicado for a meditation session from 4 am to 4 pm after praying at Lord Jagannath temple in Old Ahmedabad.